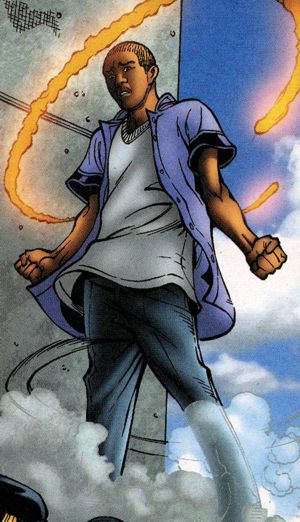 Jason Rusch is now a nineteen year-old with problems typical of his stage in life - he's just sticking his toes into the waters of adulthood, trying to decide what it means be a grown up. Jason is attending Columbus University in New York City, where he shares an apartment with his friend Greg.

Previously, Jason lived in Detroit with his father, Alvin Rusch. Life with his sometimes violent, sometimes warm father was difficult, but Jason and Alvin have made some strides in reconciling. His mom, Sylvia, left the family when an industrial accident turned Alvin bitter and short-tempered, but she has recently returned into Jason's life.

Perhaps the most important person in Jason's personal life recently has been his mysterious girlfriend, Gehenna. Due to her unusual, isolated upbringing, she sometimes made things difficult in their relationship. More recently, she left Jason because he often chose the safety of others over her, but time will if the separation will be permanent.

As Jason's plans for funding his education began to unravel due to the sudden loss of a job, he turned to Stevie Golek for a high-paying job as a courier. On his first delivery, Jason saw a light fall from the sky, sparking a large fire on the ground which Jason was powerless to avoid in his car. This light, as it turns out, was the essence of Ronnie Raymond, the previous Firestorm, searching for a new host. When Jason regained consciousness an hour and half later, he felt normal enough, but a shootout at his destination caused Jason and a nearby thug to merge to become the new Firestorm, a power which now seems to be dormant in him (FS3 #1) until called upon.

As time passed, Jason slowly began to understand and master his powers. Being a flaming, flying, novice superhero, he soon attracted the attention of villains that would take advantage of his youth and his powers. In the face of these villains, Jason was uncertain and often did more harm than good.

Some of the most important lessons came from Ronnie Raymond, the original Firestorm. Ronnie resurfaced during a desperate battle with Killer Frost. During the time that Jason and Ronnie were together, Ronnie's advice did much to steer Jason in the right direction and build resolve to serve others as a true hero. The relationship, however, was short-lived and Jason once again found himself on his own.

During the events of Infinite Crisis, Jason found himself reunited with the other original occupant of Firestorm, Professor Martin Stein. Together, they saved two earths from destruction at the hands of Alex Luthor, also saving Superman and Wonder Woman in the process. This and other acts have cemented his place as one of DC's powerful heroes. He hasn't, as yet, joined a team of heroes but he has teamed with others such as when he was called upon to help protect Metropolis from Lex Luthor's kryptonian weaponry (see Superman #653).

Jason transforms himself into Firestorm at will by merging with Martin Stein. He may merge with other people, but such less-than-ideal mergers can have some unforeseen consequences. When the other occupant is a metahuman, Firestorm can take on that person's powers. This was evident when Jason merged with Lorraine Reilly (AKA Firehawk). Outwardly, Firestorm largely takes Jason's appearance. The outward being is not exactly Jason's body - it has been shown as taking what would normally be mortal damage. While Jason and the other occupant can feel physical pain as a result of harm to Firestorm, it affords them some protection. Additionally, there is some indication that damage sustained by Jason before a merger is healed while he is a part of Firestorm. 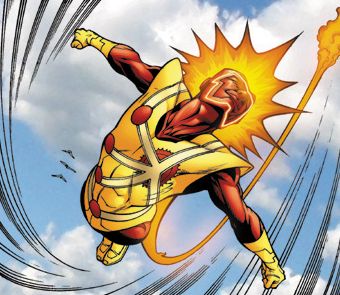 When acting as Firestorm with a partner, the two individuals dwell in what is termed the Firestorm mindscape or matrix. Less likely to be a physical place, the mindscape represents the relationship between the two people and Firestorm. When the merger ends (which is also usually controlled by Jason) the two people return to their normal, physical bodies.

Firestorm is capable of flight and shooting bolts of energy from his hands known as fusion blasts. His signature power, however, is the ability to change matter from one substance to another. This fete requires both knowledge and concentration, which this particular Firestorm is still learning to master with the help of Martin. He has learned that if he concentrates on an object, he can visualize its molecular structure. He can alter biological matter, but that usually comes at a steep cost.

There are other abilities as well, but Jason is still discovering them. He can uses his outfit to produce useful equipment. Sometimes, the Firestorm matrix gives him limited views into the past and future.

Jason, like Ronnie, was given the ability to change his density and become intangible. However, this power was seemingly lost during an encounter with Casey Krinski, whose powers allowed her to absorb metahuman abilities.

The source of Firestorm's powers is the sun itself, or other stars when he's in space. Firestorm can survive on the surface of the sun itself and will grow considerably stronger there. Ultimately, it could be that there are no practical limits to the ability to manipulate matter and energy. In theory, this Firestorm is one of the most powerful beings in the universe. It remains to be seen what uses Jason will discover for this unique gift.