Nanette and Allen Phaedon had a rough marraige. Nanette was disgusted with her husband, whose miniaturization research with S.T.A.R. labs consumed much of his time. She felt that S.T.A.R. was taking advantage of him, wanting to profit from of his research before firing him when the Detroit research facility, where he worked, shut down. She continually tried (or nagged, depending on your perspective) to get him to stand up for himself. There was some indication that she had more interest in maintaining her lifestyle than seeking the welfare of her husband, but either way she persisted. Still, completing his project was always more important to Allen. Somehow, he managed to find the time to take his frustrations out on his coworkers such as Jason Rusch.

When the Detroit branch closed, Allen relocated to San Francisco where he continued his work. When S.T.A.R. outsourced Allen's job to India, that was the final straw for Nanette. She stormed into his office and the two had a shouting match. Allen lost his temper and fired a miniaturization ray at her, shrinking her down to a microscopic size. She took her revenge on both the lab and Allen by sabotaging their computer systems from within. 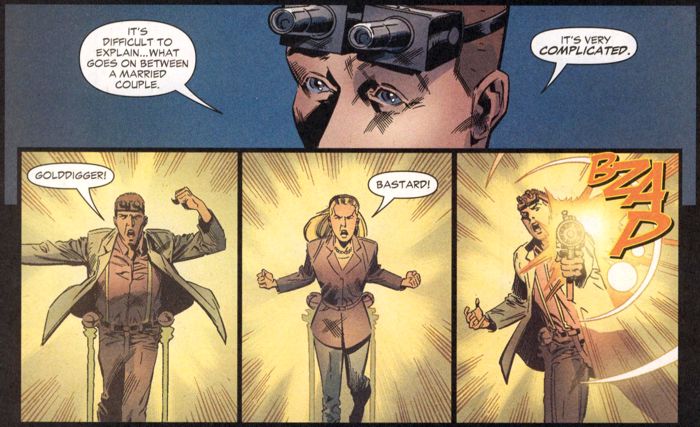 While Firestorm was visiting the S.T.A.R. labs San Francisco facility, he was attacked by an OMAC. Nanette stopped her attack on the lab and focused instead on dealing with the OMAC. From inside the OMAC's head, she helped Jason visualize the nanites that caused the OMAC transformation. He transmuted the nanites into water, stopping the OMAC but damaging the host. Nanette, who had been inside of the OMAC, also dissappeared.

Later, after Firestorm's death in space and the subsequent rebuilding by Jason and Martin Stein, they discovered a foreign element or impurity in the matrix. Upon further investigation, they discovered that Nanette had "hitched a ride" inside of the Firestorm matrix right after the incident in the lab. During the intervening time, she remained inside the matrix even when Jason was not active as Firestorm. Jason felt her presence at times but wasn't aware of the cause. Her time in the matrix also seems to have granted her some powers such as flight and the ability to change sizes in quantum steps. At least, those powers were available to her within the matrix - it's difficult to tell how she will be in the physical world. After being freed by Jason and Martin, she left the matrix and is now presumably free.