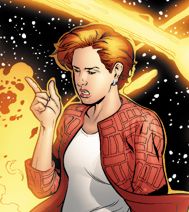 Lorraine is another character with two decades of history. A more thorough review of her history can be found on the following sites:

Lorraine Reilly is the daughter of Senator Walter Reilly and an acquaintance of Ronnie Raymond, the original Firestorm. She was kidnapped by Martin Hewitt and was subjected to experiments intended to create a being as powerful as Firestorm. In the process, Firehawk was born.

Firehawk was at first made to obey Hewitt and pursue Firestorm. With Ronnie's help, she was able to break free of Hewitt's mental control and became a hero in her own right. Lorraine often accompanied Firestorm on his adventures and the two of them enjoyed an on-again, off-again romantic relationship.

Lorraine has spent time as members of the Captains of Industry and the JLA reserve. In her civilian life, she has worked for both the Institute for Meta-Human Studies and S.T.A.R. Labs.

During the events of Identity Crisis, Lorraine saw reminders all around her of how ugly the superhero business was. With Ronnie's apparent death and the threat to the heros' loved ones, Lorraine decided to quit being a hero to spend more time with her father. Soon after this decision, however, she was contacted by Ed Raymond who asked that she look into the new Firestorm to see if there was a connection with Ronnie. It was while she was observing him that they encountered Killer Frost. Jason Rusch tried to merge with Lorraine, causing Ronnie to emerge. Lorraine was able to say goodbye to Ronnie before he dissappeared once more. When the merge ended, she was clubbed over the head by a weakened Killer Frost and left for dead in the alley. The police found her quickly and she was taken to a special facility where she recovered from her injuries.

Lorraine's mind once again turned from costumed crime fighting. She decided to follow in her father's footsteps and run for his seat as a Senator from New York. She won the election and uses her office to combat the excesses she sees in the government. 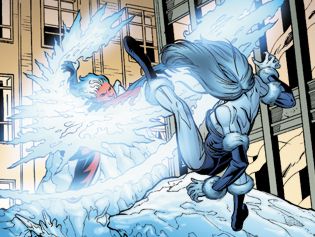 Recently, Jason turned to her when his permanent partner, Martin Stein, dissappeared. She agreed to help Jason during this time, but the two of them do not always get along. To make matters worse, they discovered that they can no longer be separated by more than a mile or the Firestorm matrix would completely destabilize. On the positive side, some of her powers as Firehawk became accessible to Firestorm when she was part of the merger.

Eventually, Jason and Lorraine were successful in recovering Martin. With the reestablishment of the Jason-Martin bond, Lorraine was no longer required to be part of Firestorm. She looked forward to resuming her life and her duties as a senator, but it appears as though she is about to become wrapped up in Firestorm's next adventures as well.

Lorraine has some control over nuclear forces. Primarily, she channels those forces into heat that she can direct. She can also make objects spontaneously combust. As Firehawk, she creates energy-based wings that she uses while in flight.